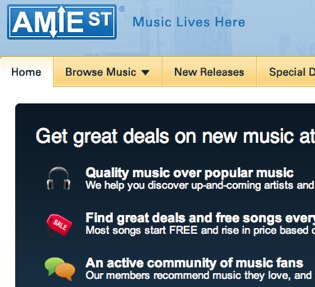 Amie Street has been acquired and merged into Amazon. Amie Street allowed customers to purchase digital downloads at a price that was dependent upon the popularity of the track. Over time a lot of artists tried out the service, songs were downloaded over 10 million times. The Amie Street team will be focused on Songza, which they acquired back in 2009.

Amazon will redirect Amie Street to a new cobranded Amie Street/Amazon Music Service site and give users a $5 coupon to purchase songs on Amazon. But while the users and the brand are being acquired, Amazon will most likely ditch the business model, say the founders (stressing that they don’t know for sure).