Marketing statisticians Neilsen have released the results of a new survey concerning the consumption of online media. Asking 27,000 consumers across 52 countries revealed what we already knew; that most people don’t pay for their content online – Nearly eight out of every ten (79%) would no longer use a web site that charges them, presuming they can find the same information at no cost. Respondents were far more united (62%) in their conviction that once they purchase content, it should be theirs to copy or share with whomever they want. Less than 5% of people pay for blogs or radio online, 10% pay for magazine or newspaper content, and less than a third would consider doing so. Music and games do better, with around 15% of people confessing to have bought content online, and slightly more than half saying that they would do so. 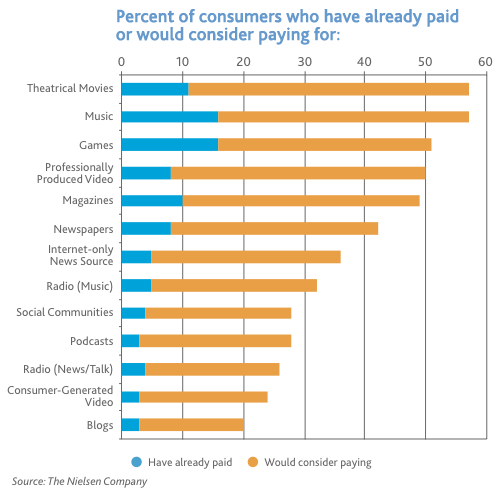 Of course, this leaves a whole slew of other options, like buying physical products, or using ad-supported services, but it’s still a fearful prospect for the music industry, as well as othersand it doesn’t take into account the fact that people might not classify themselves as music buyers in any case,  – if only half your potential market would consider buying online, and your physical sales are dropping then it’s easy to see why you might start thinking about selling off the family jewels.

It seems Spotify are still experimenting with creating their own devices

Remember when everyone thought Spotify were going to release a smart speaker and an in-car streaming device? I ‘member. There were rumours about a Spotify smart speaker for a long time and as recently as…