Spotify are growing faster than ever before, adding 10 million paid subscribers since they reached 30 million subscribers earlier this year in March.

Just a few weeks ago Spotify’s new global head of creator services Troy Carter revealed an astonishing 39 million subscribers, and now CEO and founder Daniel Ek has revealed they’ve reached a monumental 40 million subscribers. This is on top of an even higher number of users that use Spotify free, which was reported at around 70 million when Spotify recorded 30 million paying subscribers. 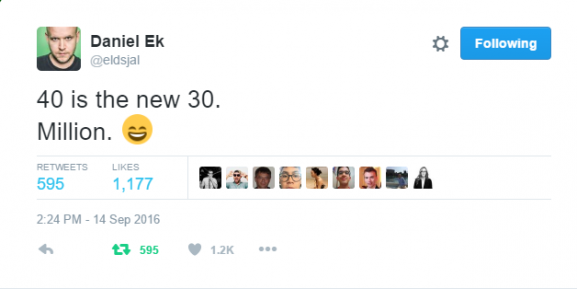 Ek revealed the numbers on his Twitter page with a little joke, but 40 million paying subscribers ain’t no joke. For perspective, Spotify’s main rival is Apple Music’s most recent numbers show 17 million subscribers. That’s less than half of Spotify’s subscribers, not even counting their free users. Although Apple Music is only just over a year old and saw spectacular growth in it’s first year, when Spotify reported 30 million subscribers Apple were reporting 15 million meaning Spotify is back in the lead for growth.

Spotify are the most subscribed streaming service in the world on their paid tier and show no signs of losing that spot any time soon. Whilst there are services like Pandora with more overall users thanks to their popular free tier, their number of paying users pales in comparison to Spotify’s with roughly 4 million on Pandora paying for the service.

How many months will it be now until Spotify are reporting 50 million users? It’s a massive milestone but if their rates of growth continue it could be even sooner than the last 6 months it took them to gain 10 million Spotify Premium subscribers.

How much a single play earns on music streaming services depends on a great deal. Here’s a rough guide to streaming royalties in 2020. A single stream of a track can be worth a very…