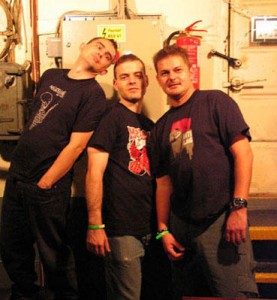 Bankrupt proved an apt moniker for Hungary’s most unique punk rock band. With the country celebrating the 20th anniversary of the Iron Curtain’s demise teetering at the edge of bankruptcy, it’s hard to imagine a more fitting soundtrack than Razor Wires And Neon Lights, the band’s 5th release. (Available on iTunes through RouteNote)

“Wave Of Bankruptcy” kicks the door in with some unrelenting crisis rocknroll, to be followed by a punkabilly postcard from a hopeless place, “Agony Bay”. The ’77-style punk rock of “Parallel Worlds” was inspired by disappointment over the East-West division’s survival even 2 decades after the fall of communism in Europe. The uptempo “Lonesome Trains” is a snapshot of the Dec 2008 Hungarian railway strike, where thousands of people were unable to join their families for Christmas due to no means of transport. Leaving politics aside, the last third of the EP starts with “No Surrender” a bittersweet pop-punk tune about not giving up your rockandroll dreams. “Independent Girl” is a beefed-up re-recorded version of an old favorite from Bankrupt’s 2000 debut album, Listen, which leaves you asking for more.

Inspired by the best moments of punk rock history, Budapest based three-piece Bankrupt deliver a unique blend of oldschool and newschool melodic punk rock, tinged with some punkabilly, rockandroll punk, and garage rock. Regardless of what hype is going on right now on what was earlier called the punk rock scene, Bankrupt stick to the music they like, and continue writing songs that sound the way punk rock was meant to be.

Bankrupt is proud to have supported acts like the Toy Dolls (UK), The Creepshow (CAN), The Real McKenzies (CAN), and many others.

[Edit – We like these guys, not only because Simon Z in our office is Hungarian, but because they sound a bit like Green Day before they went all poppy.]