It seems every week there’s a new “simpler way to learn guitar”. It’s true that learning guitar can be an arduous process with a steep learning curve. But does making it constantly easier really help anyone learn guitar?

The idea of Rhythm Guitar is that each button is a chord so rather than grinding away to learn the positions and techniques that are vital to learning guitar you can start playing immediately. The strings in the body work individually so you can play different notes from a chord and explore playing with the right hand. It’s a nice feature and gives you an easy way to get used to playing strings without having the complication of your left hand, but it’s not enough.

It’s a nice idea and there really are loads of available chords – the default, largest buttons are major/minor chords beyond which you have variants like 7th chords, power chords, suspended chords, etc. But just strumming the chord, even experimenting with fingerpicking is useless without the other half of the guitar. 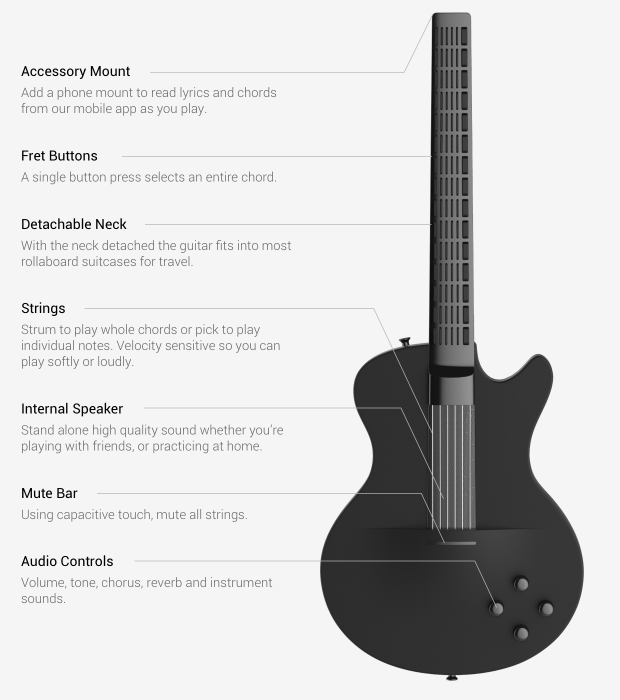 Rhythm Guitar creator, Brian Fan says he built the Rhythm Guitar because of his struggles picking the instrument up, saying: “I practiced one whole summer, and after 300 hours, I was a lousy player. I gave up. Quit.” Truthfully that’s one of the tragedies of the guitar – many start learning with good intentions and end up infuriated, vowing to never again play the smashed guitar on the floor. However I’m not sure that reducing the instrument to something that can just be picked up by anyone to play chords, there’s no learning involved.

One of the interesting features of the Rhythm Guitar is its companion app which they claim will have “tens of thousands of titles in our song catalog”. With the app you play along to songs which will show you which button number to press and play along with the song, the songs come at a cost but so does licensing tracks – fair enough. The problem with this method is it strays too far from playing an actual instrument again. It becomes a game, something that Rocksmith managed to do with real guitars already.

Verge writer Jacob Kastrenakes got to play around with the Rhythm Guitar, currently available in an Indiegogo campaign, and commented on why it doesn’t do it’s intended job. He said: “For total amateurs, like myself, the Rhythm Guitar’s problem is immediately clear: learning how to quickly press, locate, and move between it’s 90 buttons is about as challenging as learning to form chords on an actual guitar.”

Maybe this is a product that works for some and maybe it will inspire some people to take up the guitar seriously afterwards. But with a price tag starting at $299, normally $399, (a lot more than picking up a cheap guitar) I don’t think this provides enough of an experience to justify the price. How much further would it be to press play on a recording of a chord on your computer? You don’t learn where to put your fingers on an actual guitar, you don’t build strength in your fingers, there’s no trial and error teaching you the essentials of music theory and how it all comes together; this unfortunately all applies to the Rhythm Guitar. 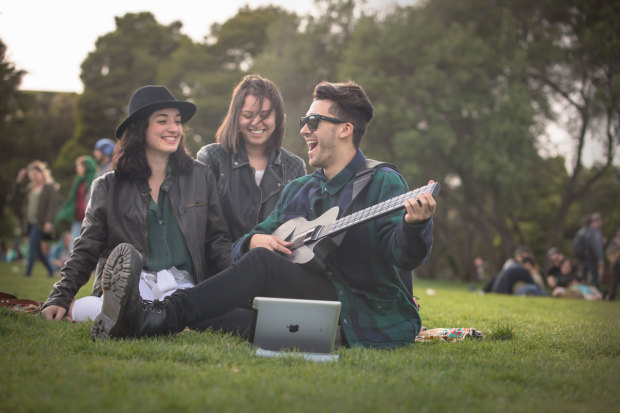 You can make your own mind up, clearly people like the idea as it’s raised over 200% of it’s Indiegogo campaign goal, but I don’t think this is the tool that will inspire another generation of guitar players. If you want to play guitar nothing will ever match the real thing, that’s my 50 cents.

If you want to check out the Indiegogo page or even purchase one for yourself (hey, I won’t judge) you can check it out here: www.indiegogo.com/projects/mi-guitar-by-magic-instruments

Ableton have got music-makers and producers covered whilst staying at home with some free gifts and discounts. Ableton know that a lot of people are struggling right now and want to give something to the…

Whether it’s for the shower or pool, these five speakers will produce a significant boost over your smartphone speakers for under $50. 1. JBL Clip 3 – $49.95 The most expensive on the list, but for a…