A new projection for the future of music streaming suggests that within just 4 years Spotify will have more users in the US than the incredibly popular Pandora.

Whilst many people think Spotify or more recently Apple Music when they think music streaming, Pandora are still miles ahead for popularity. Pandora has roughly 75 million listeners in the US whilst Spotify have almost 60 million listeners this year compared to almost 50 million last year showing giant leaps year-on-year.

A new projection from industry analysts eMarketer looks at how they predict the two streamers to contend over the next 4 years and they reckon we’ll see Spotify quickly surpass Pandora. Their predictions show Pandora’s numbers dwindling, very slowly however, whilst Spotify’s growth will continue to boom in incrementally smaller amounts each year but still showing impressive growth. 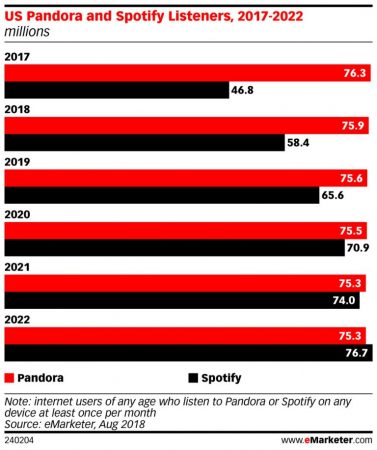 eMarketer gathered their data from “internet users of any age who listen to Pandora or Spotify on any device at least once per month”. Their vice president explains why he thinks Pandora’s growth has come to a standstill whilst Spotify still rockets ahead with millions of new listeners. He explains that Pandora have been trying to convert free users to paying subscribers solely, whilst Spotify have been enhancing their services and offering special packages to customers that are more likely to entice them in.

A new partnership with Samsung will see Spotify come as the default music service on all of their new devices from now on. Brand partnerships like this are also a massive influence on bringing in new consumers as well establishing Spotify’s brand in the minds of users.

Spotify’s growth can’t be denied although the flatlining of Pandora’s performance seems drastic. We will have to see how it really plays out in the coming years.