The past few years have seen a resurgence in what many were worried was a dying music industry, with music streaming enabling 2 years of growth after 10 years of decline.

Reported by Bloomberg, from RIAA’s midyear report, the recorded music business is in it’s second year of growth, a trend that hasn’t been seen since the peak of CD sales in the late 90’s. In the first half of 2016 recorded music revenues have grown by 8.1% to $3.4 billion.

All three of the major labels have reported growth in the wake of streaming, and smaller labels are seeing sales rise as well. Head of US operations at record label and music publisher BMG, Zach Katz said: “It feels like the market is slowly recovering after years of being in crisis and shrinking. It’s absolutely a step in the right direction.” 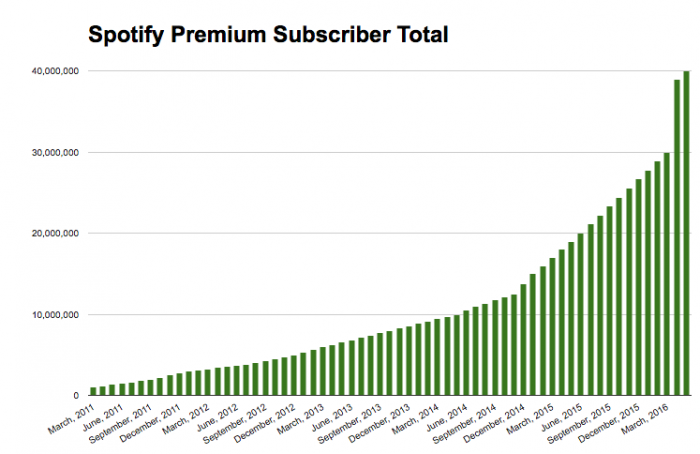 The snowballing success of streaming services has breathed new life into the music industry but it’s showing no signs of slowing down. Apple were latecomers to the streaming game, joining last June, but in the past year have grown to 17 million subscribers and become one of the world’s most successful streaming services. Spotify are doing even better having added 10 million paid subscribers in just 6 months for an incredible 40 million paying subscribers, and over 100 million total users.

Whilst not on the same level of success, free ad-supported music streaming is still showing good signs of growth with a rise of 24% in ad sales to $195 million. With streaming services like Spotify and Apple Music showing no signs of slowing their growth and with more streaming services planning to launch over the next year we can undoubtedly expect music revenues to continue recovering for a while now.

There are now almost more music streaming services with podcasts than without and it looks like Amazon don’t want to be left behind in the huge podcast boom. Spotify, Deezer, Pandora – these are just…