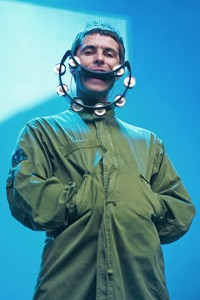 When I first heard the news that Oasis had split, one of my first thoughts was “I hope that not just Noel continues making music”. Although Noel was always rightly considered as the key component in Oasis, Liam embodied everything that the band represented.

I was more encouraged when I learned that Liam was taking the Oasis hired-guns Andy Bell and Gem Archer, both excellent musicians who managed to survive the Oasis revolving door for a decent number of years, and in my opinion worked on the better examples of Oasis’ work (Standing On The Shoulder Of Giants onwards – discuss…) to his new band Beady Eye.

Today sees the release of Beady Eye’s debut single. The band have made the download available for free from their website, however, I would seriously consider listening to the song before wasting space on your hard drive.

As delighted as I am that Liam has continued to release music and not become a full time fashion designer, the song is pretty disappointing. The relentless honky tonk piano throughout makes the song feel like it drags a bit, and the vocal melody is not particularly inspiring. Liam’s lyrics are pretty much what those of us who followed Oasis to the death came to expect when Noel allowed Liam to write.

The song isn’t all bad, there is a cool instrumental breakdown and the chorus is exciting enough. There is enough here to keep me interested and I will probably buy the album, expected next year. I can’t shake the feeling however that this is what Oasis would have sounded like without Noel; all the right bits in the right places but lacking a that quality that a natural songwriter brings to any group.

I hope this doesn’t become common opinion. Have a listen to the track below this post.

Nathan Evans has quit his job as a postman after signing to Polydor records.

Spotify add Singles marketing to their Marquee tool for all artists

Spotify Marquee allows artists to easily promote albums and EPs. Now artists can market their singles to listeners most likely to fall in love with their music.