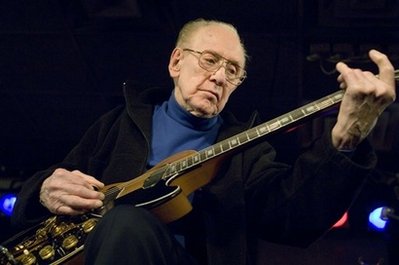 Guitar legend, ambassador and hero Les Paul has died at the age of 94.

Synonymous with a younger generation of guitarist and fans for the Gibson guitar that bears his name, and for his what was, completely original, and at the time, ground breaking sped up guitar lines of the late 40’s to another.

Les Paul (born Lester William Polsfuss) could arguably be responsible for the way, modern music at least, is enjoyed and has been developed as well as its electrical recording techniques. Les Paul, who’s death was a mixture of age and pneumonia, was one of the pioneers in the development of the full-bodied electric guitar in 1941, multi-track recordings and numerous reverb an echo effects. Many due to the frustration of the, at the time, limitations of guitar effects and recordings. The invention of the guitar pick up is one of the few things that he is solely responsible for, which basically involved his breaking a recording desk to pieces and using the magnet pickup of the tone arm inside to “pick up” the vibrations of his strings, you can work out the rest. After that the design just had to be refined down to what is now almost a standard issue “wammy bar” on a guitar. The Gibson Guitar corporation were the first people to incorporate Paul’s suggestions and present the idea to him , he was impressed enough to sign us with them, and the Gibson Les Paul was born.

Dying at the age of 94 he was gigging to the last breath putting on shows live in New York in 2006 and winning Grammys for his album ‘Les Paul and friends: American made, world played’. Les was inducted into countless halls of fame as well as being an honorary member of the Audio Engineering Society. Les died peacefully with his family and friends by his side yesterday (August 13th).