Launch Buttons is a new free app for iOS and Android that works as a pad controller for Ableton remarkably well, meaning you can keep yourself busy whilst saving up for a Launchpad.

Launch Buttons is a MIDI controller that lets you perform your tracks wherever you go. You don’t need to carry your expensive gear, your phone/tablet is just about enough. Works with virtually any DAW after a very simple set up. Ableton Live + Launchpad 95 script is recommended for this MIDI Controller emulation to work.

This free version gives you access to all 64 buttons of the 8×8 grid, 8 scene launch buttons, 8 buttons to navigate and 7 buttons for transport controls. The Launchpad95 script gives you a step sequencer, scale mode, and many more functions. 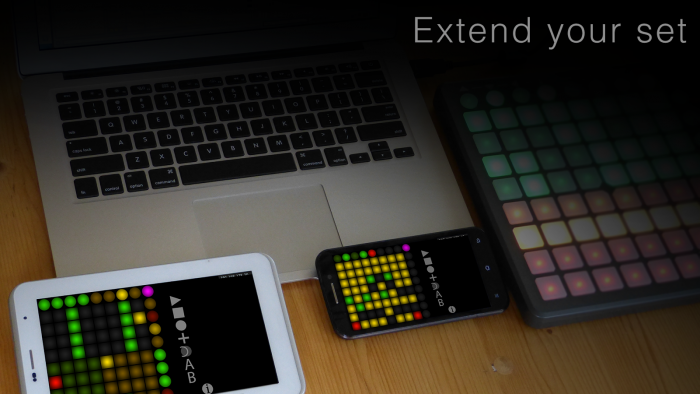 The app’s developer, Alexander Nowak, says: “The free version’s only purpose was to find out whether your wireless network supports the paid version – now it’s become a reasonable controller.”

It includes the ‘old’ colours (red-orange-yellow-green) – if you want to upgrade, Launch Buttons Plus is an emulator for a more sophisticated controller and provides you with:
– Full colour support (more than 100 RGB colours)
– 16 more function buttons (in addition to the 16 you already have
– 16 freely assignable knobs

You can get Launch Buttons now for free on the Apple App Store for iOS and iPad, and the Google Play Store for Android. The advanced “Launch Buttons Plus” is also available for $4.99 on iOS and Android.

Audiobridge have upped the capabilities on their mobile-only music recording app with 4 new effects available now. Audiobridge is a mobile app that is designed to make collaboration easy from afar. With shared projects users…