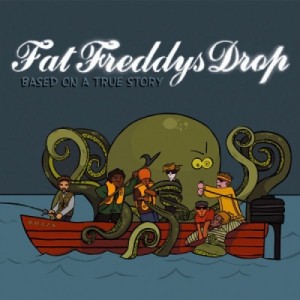 A slow, red fire burns within me, steady and warm like coal. Its heat suffuses me, and little sparks and snaps off it, bearing my mind away – back to old friends and remembered joys. This glowing kernel resides inside me because I have seen Fat Freddy’s Drop play live. I was late. I missed the support act. I scarcely had time to buy a beer, and as soon as I had something wonderful happened in my ears.

They played two consecutive nights at the Camden Roundhouse and I was at the second – the last night of their UK tour before they went home to play the Aussie/NZ summer circuit. I loved their album before I went in, and I knew they had a reputation for being great live, but even so I was blown away. In case you don’t already know, they’re a Kiwi seven-piece dub and reggae outfit, that have released one live and one studio album, and they’re big… Sorry, make that BIG down under.

Their music is crafted. This isn’t something that’s been thrown together during a drunken evening in someone’s garage – this has been worked on, pieced, built and blended together. Usually their songs will have a big, warm, deep bass line, something that doesn’t seem complex, but then as the layers of music – a drumbeat, some vibes, maybe a flute, a soft vocal – come in, an unsuspected complexity evolves, the head of the bar isn’t where you thought it was to begin with, and the key’s changed and you’re surrounded by this lush, slow, throbbing mathmos of sound.

They’re not a band that will make you fight your way to the front to get your head down into the mosh pit. They’re not a band that will keep you bouncing like a frog on speed for ninety minutes. Fat Freddy’s Drop are a band who will wrap you up in music, draw you into their performance with textured, fluid, beautifully engineered noises, and a togetherness, a tightness that comes only from practice and professionalism. More than this, their live performances are unique and structured in such a way that they have a definite culmination – an apex that is all the more significant and memorable for the fact that their drops are few and far between.

The Roundhouse gig I attended took the songs I knew and elaborated upon them, with different takes on each. There are sections in their tracks where they take the rolling beat they’ve layered from ten different instruments weaving in and out, strip it back, and then put everything together for the most grinsome, satisfying drop. There was a section during which an acoustic tune had been spun into a long, pulsing, almost trance-like piece of music, totally different from the album version, and it was only after spinning the crowd into this ten-minute trance that they stopped… and let it drop. 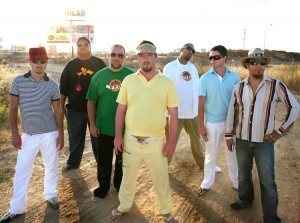 Everyone. Every single person in that audience was smiling like a loon and dancing like a happy toddler in front of the stereo. It was a musical epiphany. It was like Jake and Elwood seeing the light. I wanted to do backflips. I can’t adequately describe how good their live show is. Even to describe the fun and antic japery of their sweaty, singlet wearing trombone player is more than I can do, let alone the whole glory of their horn section.

Fat Freddy’s studio album is called ‘Based On a True Story’. If you don’t like it, you can’t come to my birthday party. They should have released their second in October last year (’08), but here we are in March and it hasn’t been released yet, so all I can do is sit, and wait, and Hope.

Using AI, ‘YouTube to Karaoke’ site would isolate the instrumental track of any YouTube music video and sync the lyrics with the muted vocal line. Unfortunately, this has since caught the attention of copyright holders…