After more than a year spent touring the world following her latest, chart topping album ’25’ Adele has revealed that she may stop touring, not just for now but for life.

After 15 months spent touring her phenomenally successful 2015 album ’25’, which she described as the “greatest accomplishment in my career”, Adele has announced she may never tour again. She revealed her decision on her third night performing at the Mount Smart Stadium in Auckland, New Zealand.

Adele was the first artist to have 3 sold out shows at the Mount Smart Stadium, but apparently her live success isn’t enough to convince her to keep performing. Speaking to the 40,000 large audience on her third night there, Adele said: “Touring isn’t something I’m good at. Applause makes me feel a bit vulnerable. I don’t know if I will ever tour again. The only reason I’ve toured is you. I’m not sure if touring is my bag.”

Whilst performing in and out of a pink poncho, due to stormy rain over the open-air arena, the singer did add: “It’s changed my life. I understand why I do it.” Despite her ridiculous levels of global success Adele has often spoken on her nerves performing live, meaning it’s not surprising that she would want to stop touring once in a position to. 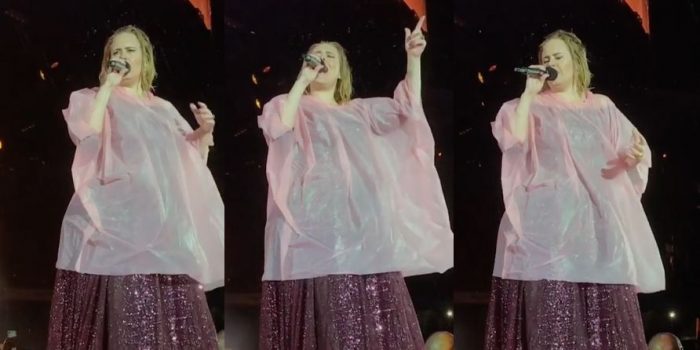 Adele’s tour promoter for Australia and New Zealand, Michael Coppel, spoke to Australia’s News Corp media last week, saying: “We may never see her again. Adele’s been quoted as saying she won’t tour again, she’s doing this big tour as a recognition of her huge record sales and the enormous demand to see her live. It’s impossible to tell what happens next. Then the future’s an open book.”

Near the start of her Australian tour she expressed similar sentiments, saying to her crowd in Perth back in February: “I don’t know if I’ll tour again but I’m here now and it’s fucking beautiful and I love it.”