Arturia have been making some really interesting gear in the past few years, from analogue synths and drum machines such as the Mini/Micro & DrumBrute, to very impressive modular systems like the Matrixbrute. Wherever Arturia decides to focus their attention exciting things seem to happen, and the Beatstep Pro is certainly no exception.

The Beatstep Pro (BSP) acts as a controller, performance sequencer and composing tool all at once.  You have the ability to easily connect and sequence multiple hardware and software instruments, a problem that is often faced by music producers and performers. The BSP can be used as either a brain, slave or controller with a huge array of gear, meaning it can be the heart of your setup, or just a sideline controller. You can even use it without the aid of a laptop.

The first thing you notice about the BSP is just how swish this bit of kit is. The sleek design coupled with the crisp white finish is enough to get any hardware fanatic excited. And it doesn’t just look good either, the build quality is exceptional. The BSP is compact but solid, making it ideal for lugging around from venue to venue.

Off the bat, you can see three channels named drums, sequencer 1, sequencer 2 and an additional control mode on top. The original BeatStep only had the ability to create one monophonic sequence at a time, so the possibility to create 3 separate sequenced lines already sets this device apart from its predecessor. 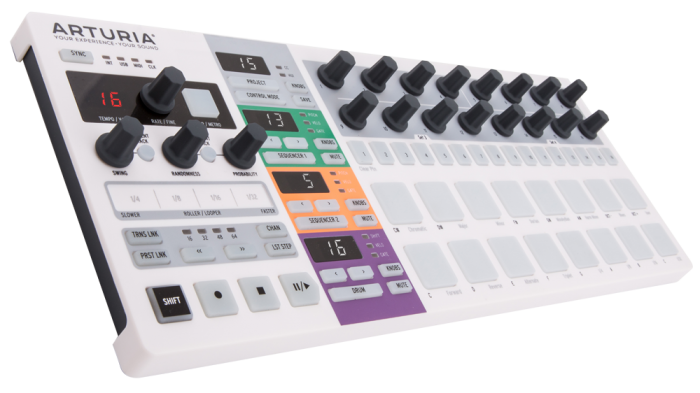 To the left of the channels you have a number of buttons and knobs that allow you to adjust project parameters and control the inner workings of the BSP. You also have a touchpad ‘roller/looper’ which might be one of my favourite features. It acts as a slicer tool that cuts and replays part of the loop in a very effective way; a feature you might find on certain DJ programs and devices.

Like the first BeatStep, to the right you will find 16 velocity sensitive pads with aftertouch and 16 rotary knobs. What Arturia have cleverly done with the BSP, is sandwiched an extra 16 on/off buttons in between these sections. These are used for displaying where you are in a sequence, adding notes and adjusting a number of various control features. The BSP also comes with a nifty program called midi control center; from here you can edit built in default parameters, edit/save/backup projects as well as loads of other convenient features.

On the back you will find a satisfying number of output choices, these consist of;

Once you delve into the full connectivity options, you begin to realise the endless combination of equipment arrangements available. This makes the Beatstep Pro attractive to a wide variety of electronic music producers and performers. Simply having the ability to sequence multiple instruments from one device is a huge asset for live electronic performance, and can also be used as an incredibly efficient composition tool.

Step Into The Box

With the BSP comes a quick guide to setting up and basic features, 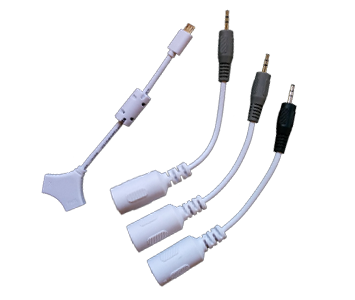 however I would strongly recommend downloading the manual from Arturia’s website, particularly if you are new to step sequencers. There is also an array of interesting looking cables and adapters which I have listed below:

This combination of cables allows you to hook up a variety of kit, and with the addition of CV (control voltage) and gate cables you can play with just about anything. I put the BSP through its paces to see just how well it coped when dealing with a number of different signal outputs. A list of the gear I tested with the Beatstep Pro is included below,  as well as a link to a performance showing off its capabilities.

Taking Steps To Get Connected

After plugging in the cables to various devices, I was amazed at how  easy it is to connect up everything I had; admittedly I did have to refer to some troubleshooting forums for one or two things. I found that when you hook up certain analogue synths, it causes the pitch to jump up by an octave or two. I believe this is caused by the CV signal output being disrupted and selecting the wrong default midi note. After a quick google I found a video link on Arturia’s website that had a fix. I had to to go into the midi control center and change the default midi note to my desired pitch.

I also found mild latency issued when running through a DAW (Ableton), however this can be fixed by adjusting the output buffer size in Ableton’s audio settings. Despite minor connectivity problems, the BSP smashes other step sequencers out of the water for simultaneously sequencing multiple hardware and software devices.

The 16 MPC like drum pads can be used to record notes or be played as a standalone synth or drum rack. As mentioned earlier the 16 on/off pads can be used to manually write in notes or change a number of extra features when the shift button is held down. Above these pads you you’ve also got 16 rotary knobs which can edit pitch, gate or velocity for sequencers 1 & 2. When the drum channel is selected they affect shift, velocity and gate.

When in ‘control mode’ the rotary knobs have some very handy features including the ability to midi map the rotary knobs and selected buttons. You can chose to arrange maps or use the ‘Macki Control’ setting for a pre-set arrangement. I found that by midi mapping knobs and buttons to mute, record and various effects within Ableton, I was able to control my performances almost entirely via the BSP. 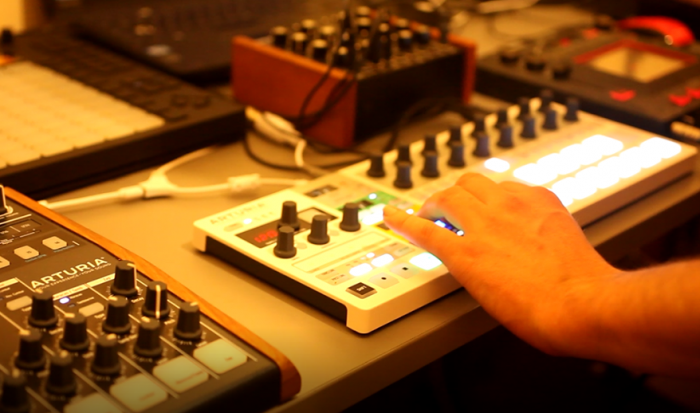 As previously mentioned the ‘roller/looper’ is a truly great element of the control surface and I had endless fun playing around with it. Alongside this feature you have three separate rotary knobs labeled ‘swing’, ‘random’ and ’probability’, with these you can tweak rhythms and swing. If used tastefully you can create some interesting results, however depending on the current rhythm being played, too much can cause confusing and incoherent rhythms.

Once you get to grips with general functionality, the BeatStep Pro is a very intuitive piece of kit. I really enjoyed playing around with different loops created from hardware instruments, then using my Ableton Push to build other loops and clips on top. Personally I found this to be a great process for developing live sets and creating tracks based around simple looped hooks.

When it comes to electronic music hardware I am a bit of a spontaneous buyer.  I see something I really like… I want to buy it immediately. This in turn can cause issues when I  try to integrate something new into my setup. It’s great having a lovely piece of kit, but if it doesn’t talk the same language as your other gear it’s going to be a nightmare to arrange in a playable format. This is where I feel the BSP raises the bar for step sequencers.  It really doesn’t matter what equipment you’ve got, the BSP will find a way to integrate into your arrangement.

Although it came out nearly 2 years ago, the BeatStep Pro maintains a solid buzz of excitement from musicians and producers of all kinds. And based on the ratio between what the device can do in conjunction with what it costs, it’s really not surprising. You can own one of these for just over $250 (£200) which is considerably cheaper than its competitors. You just don’t find control surfaces with as much functionality as the BSP for under $400, Arturia have found a way of producing a sophisticated and durable product that the masses can afford.

What does it for me is the fact that it doesn’t matter whether you are using hardware or software, Midi or CV, the BSP will talk its language and know what to do with it. Personally I wouldn’t refer to the BeatStep Pro as a sequencer or a controller, but as a mechanical chameleon that can combine your devices into one super-control surface. 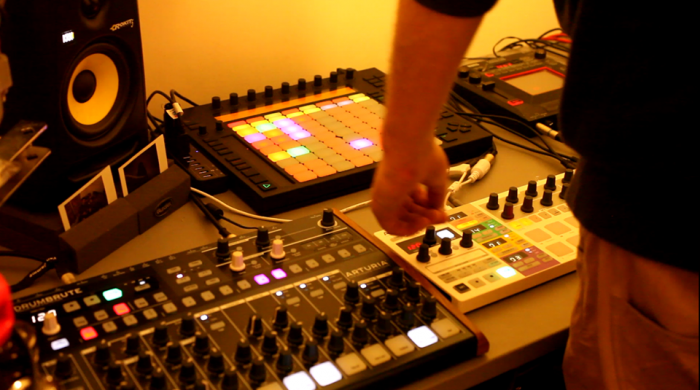 Getting Hands on with Beatstep Pro

For this video my setup included:

If you are interested in finding out more or purchasing one of these badboys you can check it out on Arturia’s website – www.arturia.com/beatstep-pro/overview

Tune in to a free webinar on the brand new MIDI 2.0 next week

Join the MIDI Manufacturers Association and others explore the potential of the first update in 35 years to the world-famous music production tool. 2020 is the year that MIDI 2.0 updates the potential in digital…

Download IK Multimedia’s incredible distortion from their digital AmpliTube series for free but act quickly! IK Multimedia have a real treat for you; whether you’re recording instruments straight into your DAW or want to add…