Apple have revealed the HomePod, a Siri powered home speaker that is unique because… erm… well, because it’s made by Apple.

This week Apple announced their first own-brand speaker, the HomePod, which introduces a new direction for Apple. But whilst it’s different for Apple, it doesn’t really offer anything new for home speakers – but will still appeal to Apple Music subscribers.

Much like competing home speakers from Google and Amazon, the HomePod features Apple’s own AI Siri as a voice controlled assistant. With the contemporary-classic duo of speaker and microphone you can ask Siri to play music, how the weather is, whether you have any missed calls and so on. This is a feature shared across Google Home and the Amazon Echo with Cortana and Alexa AI’s respectively.

The HomePod will be the first home speaker with voice control for Apple Music as other speakers only allow connection via Bluetooth, which should appeal to subscribers. However playing music from other services requires going through Apple’s Airplay 2 function, meaning you can just tell the speaker to play a song on Spotify. So you win one and lose everything else. 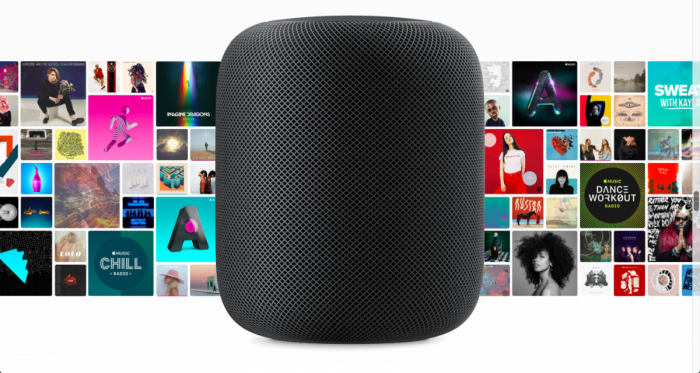 When it comes its main use: music, the Apple Homepod starts to stand out from its predecessors with Apple emphasising the speaker’s audio quality. Apple say: “We completely reimagined how a speaker should make music in the home. HomePod combines Apple-engineered audio technology and advanced software to deliver the highest-fidelity sound throughout the room, no matter where it’s placed. This elegantly designed, compact speaker totally rocks the house.”

The speaker features 7 tweeters placed to output crisp, 360-degrees of audio. The 20mm speaker is also pretty unique for the size of the device, allowing a deep bass that isn’t distorted with volume increases. Apple’s press release said that “the speaker delivers the deepest and cleanest bass possible, with low distortion” with “well-balanced smooth timbre”.

Apple’s HomePod has the ability to control smart-home devices like lights and heating however it was briefly mentioned and clearly isn’t the focus for the HomePod. Instead during the announcement the emphasis was mainly on music, both it’s connectivity with Apple Music and in particular its impressive audio tech built-in.

One thing that Apple does differently to its soon-to-be rivals with the HomePod is its spacial awareness technology. Wherever you place your speaker, the HomePod will analyze its environment and “within seconds, [it] is perfectly optimized to deliver an immersive music-listening experience wherever it is placed”.

Apple’s HomePod will begin shipping later this year in black and white in December for more than the Google Home and Amazon Echo combined, at $350. Whilst Apple certainly aren’t strangers by now to excessive price tags, with a 4-inch woofer and range of tweeters providing quality audio, and an A8 chip from iPhone’s powering it its justified in being more costly. Just perhaps not that much more.

You can get one of the world’s favourite DAWs at one of it’s cheapest prices ever starting at $69 until May 30th. Ableton Live is a favourite for recording musicians and producers alike around the…

Ableton have got music-makers and producers covered whilst staying at home with some free gifts and discounts. Ableton know that a lot of people are struggling right now and want to give something to the…