A survey has revealed that more than twice as many people listen to Amazon Music as they do it’s popular competitors, or so it seems.

The assumed underdog of music streamers, Amazon Prime Music, has been revealed to potentially be more popular than all its music streaming opponents. It comes bundled as part of Amazon’s Prime package offering free one day delivery, music and video streaming services, and other benefits. Amazon’s music streaming section wasn’t thought to be a major player but a survey by Cowen reveals otherwise.

A survey taken to examine which paid services people used to listen to music in May this year has put Amazon above competitors like streaming leaders Spotify and the breakout new service Apple Music. With 16% of respondents saying that Amazon Prime Music was their paid music service of choice Amazon was only surpassed by Satellite Radio which was used by 22% of respondents. 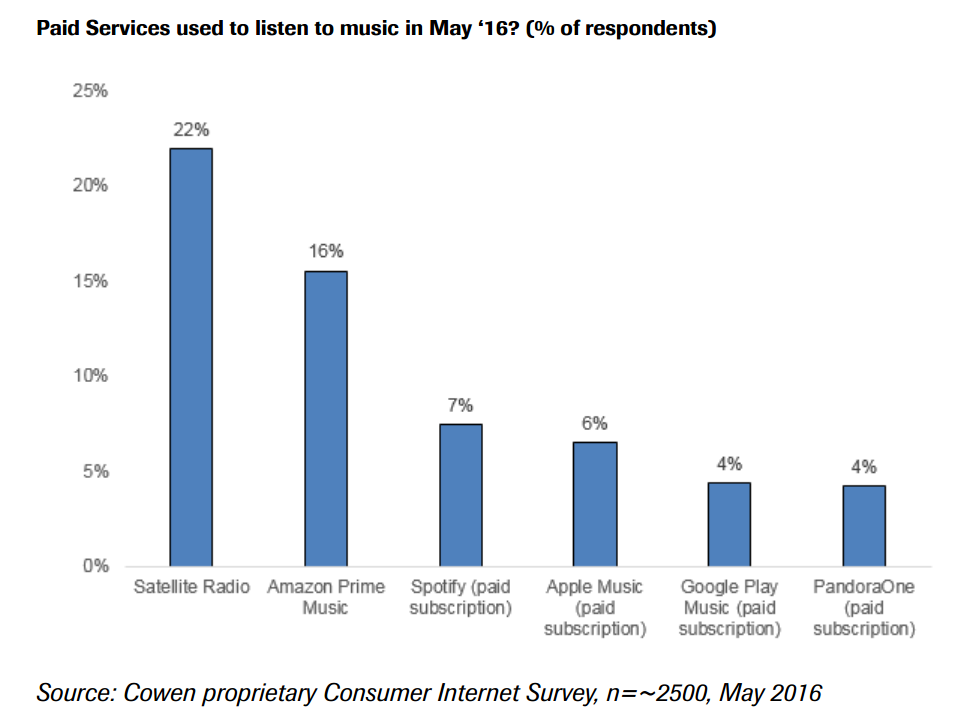 Cowen’s John Blackledge and Tim Arcuri, who undertook the survey, wrote: “Prime Music was the only on-demand streaming service to crack the top five of the main sources of music for the 4 age cohorts 35+. Given the increasing competitiveness within the on-demand streaming industry, focusing or ‘owning’ a specific niche, like a particular age group, may not be a bad strategy. It is unclear if this has been Amazon’s strategy or the byproduct of its Prime member base.”

It’s always been unclear how popular Amazon Music has been as it comes bundled with the Prime package which has hundreds-of-millions of users, but not every Prime user uses Prime Music. Meanwhile Spotify have been leading the streaming landscape with over 30 million users, and Apple Music quickly catching up with just under half that since launching just over a year ago.

Survey’s can’t be taken as clear fact as they don’t represent a worldwide view, rather just the view of a select group that could differ massively from other areas. Regardless, the results show an interesting appeal for Amazon Music that has been slowly building it’s service, saying earlier this year that Prime Music streaming hours had more than tripled from 2014’s Q4 to Q4 in 2015.

On top of this rising popularity Amazon are rumoured to be launching a standalone music streaming service, putting them in direct competition with rival streaming services. Earlier this year Amazon allowed users to subscribe to Prime Video outside of Prime as well, opening these services up to new audiences who didn’t want the full package.

Regardless of the survey results Amazon are quite a way from reaching the notoriety of Spotify and Apple Music. Additionally their music collection of just over a million tracks pales in comparison to the roughly 30-40 million tracks of other streaming services. We will have to wait and see how Amazon perform with a standalone music streaming service, and whether they really are more popular than other behemoth streamers.

Is the Coronavirus boosting music streaming?

Social distancing and self-isolating are having huge impacts on our lives – are they also affecting how much we listen to music online? People are spending a lot more time at home now, you can’t…

Coronoavirus is good for someone – Joox is seeing a boom in music streaming following the global outbreak and could lead to their expansion. Another music app owned by the Chinese conglomerate Tencent is seeing…