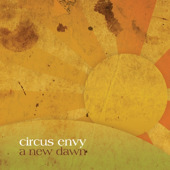 Something has happened to folk music recently, something I’m not sure I like. Following the success of acts like Noah And The Whale, Mumford & Sons and Laura Marling, many artists already established as ‘folk scene’ artists have tried to replicate elements of this folk/pop, in an attempt to break into the musical mainstream.

I want to make one thing clear before I start; my gripe is not with artists such as Laura Marling and the others described above. My gripe is with folk musicians who are very specifically folk musicians, not pop musicians, that try to take elements of pop music and elbow it into their own music without really understanding how to go about doing so. Usually this means thoughtlessly slapping drums and percussion over perfectly acceptable acoustic music that really didn’t need it.

Circus Envy are a perfectly competent folk band, who seem to have fallen into this most unfortunate modern trap.

The opening song and title track ‘A New Dawn’ starts promisingly with a fantastically sparse but harmonically dense swell of ethereal richness. The vocals and guitar are absolutely beyond criticism, and the first time you hear the chorus I dare you not to well up at the sheer sentimentality of it. Then the second verse starts and the drums make their most unwelcome entrance. Oh dear. A perfectly good song ruined by a needless back beat.

The rather appropriately named second song ‘Going Nowhere’ couldn’t be more irritating. It sounds as though they’ve heard some flamenco and decided to write a song that nods in its general direction.

After this we are treated to the E.P’s highlight, a superb arrangement of the traditional song ‘Three Score and Ten’. Here, the band manage something thus far avoided on this EP; sounding like a folk band. This really is a superb and well thought out arrangement of a very fine song. The verses are full of anticipation and tension before exploding into a foot-stomping, sing-along chorus. The instrumental accompaniment is excellently considered too, often restrained and providing a pedal for the vocals to sit on top of before being allowed to flourish when taking the tune.

The final two songs are both perfectly acceptable and worth a listen. ‘The Game’, a jazzy, swingy ditty that has a belting flute solo towards the end and ‘The Night Draws Closer’ (did you see what they did there?) a folky anthem with some lovely fiddle and squeezebox playing towards the end. Both of these songs, despite their strengths suffer from some ridiculous and some entirely unnecessary percussion and drumming, respectively.

So, is this a ‘good’ E.P? Well, I suppose it is, or at least it would be if Circus Envy would slap themselves and switch on their self-awareness detector. I have no doubt that they are a very good folk band, and when they actually decided to be one they really shone.
The problem they have is similar to that of a very beautiful girl who happens to be into RPGs and sci-fi but tries desperately to fit in with the boring mainstream girls, oblivious to what it was that made her so beautiful, special and interesting in the first place. They decorate their interesting music with completely pointless intrusions that only obscure from view the very things we want to see.

I suppose my issue is really with modern folk musicians trying desperately to drag folk into the 21st century with percussion, drums, electronics and what have you. There is nothing wrong with this, modernising music ensures its survival and a few artists do it with enormous success, as Mawkin:Causley have done. It can also go horribly wrong as anyone who has ever seen a Jim Moray live set will confirm.
Problems arise when this is attempted by traditional ‘Folkies’, people who have grown up in folk music and as a result know very little of the modern world and mainstream culture. Whilst the rest of us were smashing beer bottles over the heads of policemen, they were dressed up in absurd costumes and learning how to do ridiculous traditional dances.

A New Dawn Can be purchased on iTunes and for more information on Circus Envy click here.