Akai’s new MIDI controller doesn’t just give you power over your software but stands alone as it’s own beast with built-in sounds and speakers.

Akai’s MPK Mini Play is a super portable version of “the world’s most popular MIDI controller’, Akai Professional’s MPK Mini. Whilst it’s been made small so you can take it with you for the beatmaker on the go, the Mini Play is packed with with new sounds and it’s own speaker, even a joystick, transforming it into it’s own instrument as well as a versatile and powerful little MIDI controller.

The MPK Mini Play features 128 of it’s own sounds which can be played anywhere using it’s built-in speaker, or plug it into your PC and expand your sound library. All you need is 3 AA batteries to get the mini keyboard working, giving you hours of wireless fun with 25 synth-action mini keys to play with and 8 drum pads complete with red backlighting for tapping out beats or activating scenes in your DAW. As well there are 4 knobs for editing sounds with or sending MIDI. The interesting addition of a joystick also gives you superior control over your software.

Akai Professional’s product manager, Dan Gill said: “We are extremely excited to introduce the MPK Mini Play. The MPK Mini was a huge hit with musicians and now having all those sounds on-board with a built-in speaker, along with its go-anywhere portability, Play opens up new musical possibilities that people are going to love.” 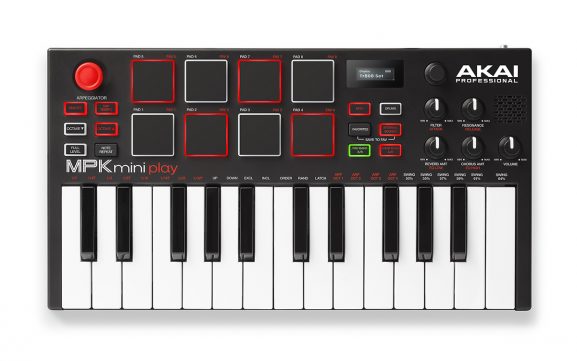 The Mini Play has the same plug-and-play MIDI functionality of all Akai’s controllers making it simple to dive straight in and start playing with your gear. But when it comes to playing the miniature keyboard on itself you have the option to make it personal with a headphone jack, or use the exact same output to plug it into some speakers and wahey you’ve got a gig-ready keyboard.

Overall this mini-beast packs in: