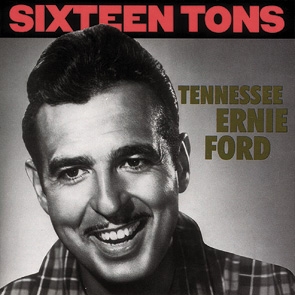 Ernie Ford and the Jack Fascinato Orchestra’s “Sixteen Tonnes” was the first number one of 1956, and went gold in the US and the UK inside just one month. In just nine weeks the song sold over two million singles and stayed at the top for four weeks and also the first time that the then Soviet Union, had ever heard Country and Western music.

“Tennessee Ernie Ford” was possibly the busiest man in the 50’s . With a five days a week prime-time television show that started to fall behind thanks to his commitments with Capitol Records. Ernie started to get strongly worded letters from Capitol Records telling him that he would be in breach of his contract if he didn’t start to work in the studio soon to get things done, but Ernie was holding out for a chance to work on a song form a man he really admired as a songwriter named Merle Travis. Merle had already proved his weight with some clean wholesome clean-cut American songs like “Dark As A Dungeon and ‘John Henry’. Ernie said “I liked the songbook Merle sent me, he lived in an old Coal mining town, similar to where my Father and Grandfather mined coal. I showed ’16 Tonnes’ to the conductor an we liked it very much, I told Capitol I’d chosen a song but they didn’t even listen to it, they were just inpatient an told us to get on with it”.

The song was a sort of Punk song of its day in the way that it argued against the unfair practices and conditions of a coalminers day to day job before the coalminers unions were created. Mine owners also owned the local stores, and seeing as most of the miners were paid in tokens they were cheated at almost every turn. With lyrics that were considered more aggressive than anything else at the time in its blatant poke at poor working conditions, the song is now seen as one of the first “rebellious” main stream songs and supposedly gave birth so the trend of kids buying record as a form of protest against establishment. Tame compared to today’s “Rage Against The Machine” standards of course, the song has still been seen to have contributed enormously to the movement we now know as “Rock And Roll”. Good work Merle.