This is a bluetooth speaker with a difference, well many differences, but will its massive statue shaped like a pixelated Iron Man put you off?

The AD’OM is a crowd-funded bluetooth speaker that brings a whole host of new features to the increasingly popular devices. Created by Kalium Labs, the AD’OM doesn’t just play music but can charge your phone (even wirelessly!), lights up with multicoloured LEDs, and even features an in-built smoke machine.

Kalium Labs believe that through their work, “the speaker design is set to change forever”. They say on their IndieGoGo page: “Kalium Sound Heroes are the most futuristic Bluetooth speakers that have ever existed. Every angle of our speaker is polished manually giving it a polygonal design complemented with sharp edges.

“Immerse yourself in an alternate universe with this otherworldly piece of art as it illuminates your room with over 16 million colour variations of ambient light. Create the perfect atmosphere with the smoke effect that surrounds the speaker and the ambient light reflected perfectly on the polygon shape of your Sound Heroes speaker.” 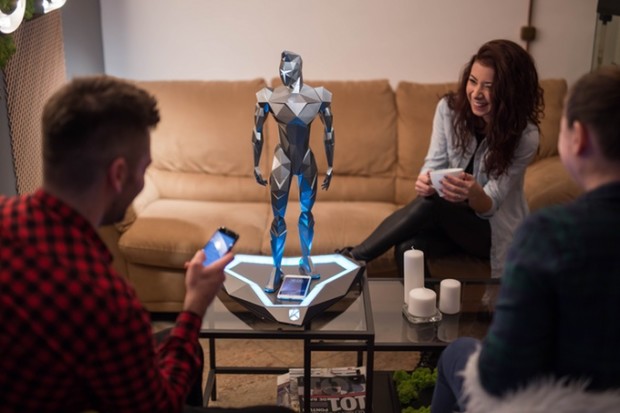 The design of the speaker is certainly its most notable element at first glance, standing three feet high with its superhero shape it’s enough to frighten the pets. With such a striking appearance it’s also going to put a lot of people off, despite it’s unique new feature-set, thanks to its prominence as well as the curious choice of design.

The features are where the AD’OM suddenly seems like a good purchase, as it features:

Listen to music in a custom coloured ambience, with 16 million variations. Multicolor RGB LED dock for an interactive pulsating visual map of the music. Set it up, hit PLAY and get immersed.

Take it to the next level and impress anyone by using the smoke machine feature. It’s water based, rechargeable and looks epic.

Take control of your environment with the Wi-Fi extender feature. Link multiple speakers and spread the music through your home.

Kalium expect to start shipping in October. Find out more and get your own for as cheap as $100 whilst stocks last here: www.indiegogo.com/projects/sound-heroes-bluetooth-speaker-of-the-future-music

iPhone 12 won’t come with a power adapter or EarPods

Apple analyst Ming-Chi Kuo claims the 2020 iPhone will not come with a USB wall adapter, to offset the high production cost of iPhones with 5G. We already know there’s a high chance that Apple…

Thanks for sharing such a nice update about bluetooth speaker. Keep posting more updates on your page.

I ordered this exact speaker from a fb ad …i did not get that speaker i got a small blootooth speaker. A speaker they give away…ill never order anything from facebook….$39.00. Out….i want that speaker so where is it reall available?????