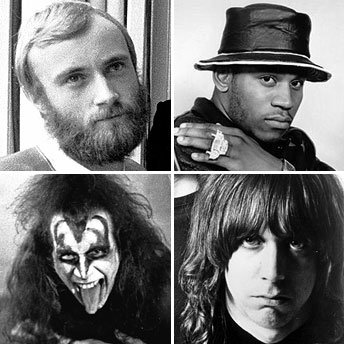 The nominees have been announced for next years rock and roll hall of fame induction and is being named the most diverse group of nominees ever. The lucky artists are The Red Hot Chili Peppers, Kiss, Genesis, LL Kool J, The Stooges, Donna Summer, ABBA, Darlene Love, Laura Nyro, The Chantels, The Hollies and Jimmy Cliff, to name a bunch. You qualify for a nomination to the hall of fame after enjoying 25 years of rocking past your debut release.

Kiss, who are surprisingly only enjoying their first ever nomination, felt it was long overdue. “There are disco bands, rap bands, Yiddish folk song bands in the Rock and Roll Hall of Fame, but not Kiss,” Gene Simmons told Rolling Stone last year. “I believe we have more gold records in America than any other group, but it’s OK.” This years nominees also see The Red Hot Chili Peppers and LL Cool J join the ballot both on their first year of eligibility. The deserving winner will join a prestigious list of famous faces including, Lynyrd Skynyrd, ZZ Top, AC/DC and The Bee Gees. Red Hot Chili Peppers are this years favorites.

The rock and Roll hall of Fame nomination committee is made up of a diverse group of around 30 respected rock and roll experts. Including executives, journalists historians and musicians who meet in New York once a year to compile the ballot for the next years Rock and Roll Hall of Fame inductee election.